We are proud to announce that we have gathered superb faculty: more than 32 colleagues from 13 countries will be contributing—Professor Foad Nahai, Mark Jewell, Kye Higdon, Lee L. Q. Pu, Ruth Graf, Giovanni Botti, Marwan Abboud, Luiz Toledo, Norbert Pallua, Guy Magalon, Luis Macias, Nora Nugent, Birgit Stark, and Angelo Trivisonno, just to name a few—together with other Norwegian, American, Nordic, European, and international faculty. Many lectures and courses will be presented at this educational 1.5-day meeting, starting Friday at 07:40 am and finishing with lunch at 2 pm Saturday, October 26.

As tradition obliges, the program will be divided into 9 specific sessions: face; rhinoplasty, stem cells, fat grafting, and regenerative surgery; breast (2 sessions, including the latest on ALCL and updates on recent innovations/long-term results from the leading breast implant brands); quality of life and patient complaints; and patient safety, including morbidity and mortality in combined/high-risk procedures in aesthetic surgery; postbariatric (MWL patients) and body contouring surgery; practice management; and aesthetic medicine. New for this year, we have also planned “mini panels,” where speakers on a topic will have their own panel discussions, allowing more time for dialog and debate.

We will have many variated topics and many lectures per faculty member rather than 1 lengthy lecture. We believe, as do many of our faculty, that this method will enhance critical thought processes and stimulate discussion for the majority of our colleagues, allowing them to reflect and come up with new ways of thinking. Hence, we decided to cover as many aspects of aesthetic surgery as we could with the 9 sessions, rather than simply presenting a limited number of topics.

Registration is now open and limited to the final stage and on-site registration. To register online, please go to www.naam.no and scroll down to Registration. Payment can be made through PayPal.

There will be a faculty/congress dinner Friday, October 25. Please consider registering for this as well. You will be among new and old friends, colleagues, and faculty members, as well as exhibitors who show great support of the plastic surgery community by attending this event and enjoying dinner with you all.

The congress will be held in Oslo, the beautiful capital of Norway, at the beautiful and classic Oslo Military Society. Oslo, with its fjords and natural surroundings, can be sunny and chilly in late October, about 16ºC (60ºF), with clear skies and a chance of rain. For hotel suggestions, starting with the faculty hotel with a reduced price for delegates. To book, please see the website and scroll down to Hotel.

With several weeks still to go until the meeting, we already have more than 120 participants from 24 countries. We look forward to this exciting meeting and to seeing you in Oslo, October 25-26, 2019. 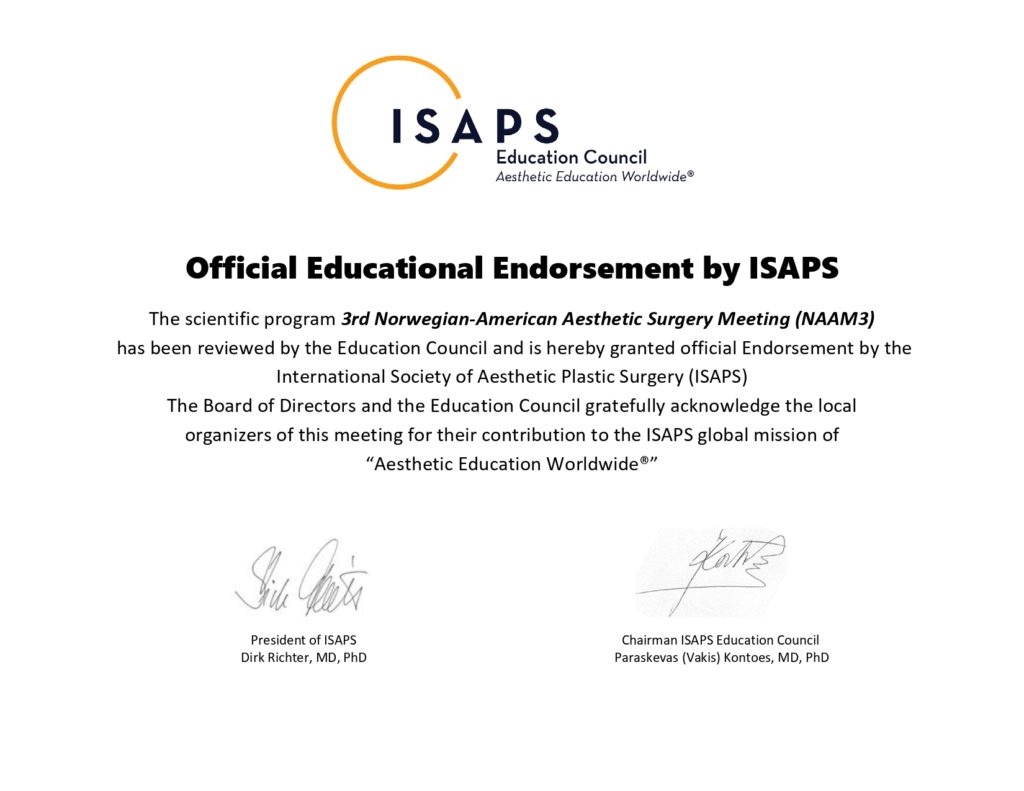